For some of those people out there who tend to make fun of this band, or scoff at the fact that they’re still around – Maybe there’s a very good reason why they’ve actually never gone away. Yeah they had a couple big hits and 1 big album. That shit happens sometimes. Continuing to have a career and making even better albums than your hit album also happens. Just because the mainstream world of music changed doesn’t mean that bands and artists can’t continue on. This is a case where a guy kept the vision alive even when there were times when the plug could’ve easily been pulled. The real problem is that the worst mishaps and mistakes came from business and corporate decisions, and not music decisions. And no, big brother Rob Zombie hasn’t had a hand in anything. That’s the only mention of his name you’ll see in this article.

For people who think they only ever released 1 album in 1999, I’m sorry. You’re mistaken. Powerman 5000 has released 3 EP’s, 1 independent album, 1 rarities compilation, 1 covers album, and 7 studio albums that spans from 1992-2014. They also have a new album on the way, due out later this year. If you’d like to know more about their history, you can listen to a 49 minute interview that I did with Spider right here. 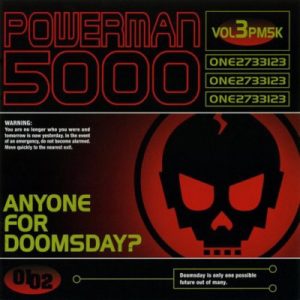 The album that never officially was but wouldn’t die so it kinda is. Make sense? Due to management and record label decisions, the album was pulled 2 weeks before the release date of August 28, 2001. Which in no way has anything to do with 9/11, clearly. All around the same time you had the hit “Bombshell” on the radio and getting video rotation on channels that played videos (remember those?), as well as their cover of the 80’s hit “Relax” that they recorded for the Zoolander soundtrack. 2001 was leading into what would’ve been a very strong 2002 for PM5K with a headlining tour also featuring Machine Head and saliva. The album being pulled, 9/11 happening, and corporate crap lead to 2 founding members leaving and the chaos that ensued lead to another 2 years before the follow up was released.

“Anyone for Doomsday?” in hindsight would’ve been perfectly ok to release and the band would’ve continued on in any case. The album is strong and there aren’t any bad songs, but in the context of their entire discography, it was lacking a little. You can find the album on Spotify and iTunes and Amazon to stream or to download the mp3’s. It’s out there for everyone to enjoy now if they want. “Danger is Go!”, “The Meaning of Life”, “The End of Everything”, “What the World Does”, and “Wake Up” would all make excellent live songs and I hope one day they bring more of those out into their set. 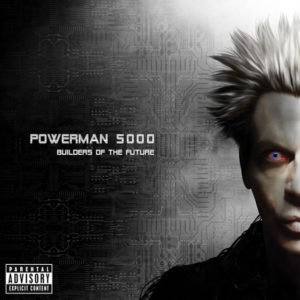 As of this writing, this is their most recent album. Their longest gap between studio albums (5 years) lead to “Builders of the Future” which kept in line with the style the band is best known for. They did take some chances though and those are always welcomed. “Builders of the Future”, “I Want to Kill You”, and “Evil World” were among those chance taking songs and paid off very well. Pure electronic, trip hop, and even a hint of dubstep works in Powerman 5000. Spider had said about the album that they weren’t reinventing the wheel and just wanted to make it bigger and louder and that’s essentially what we were given. It’s a very well rounded album and essentially encompasses everything they’ve ever been known for to some degree. “Invade Destroy Repeat” is their most ass kicking song to date. 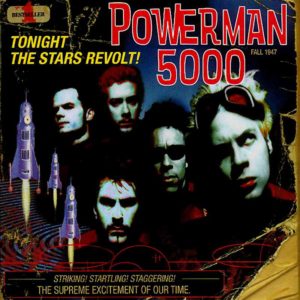 The release that took them to the universe and back. Where 90% of people came across them due to mainly “When Worlds Collide”, but also maybe “Nobody’s Real”, and even possibly “Supernova Goes Pop”. A 90’s classic, and one of the essential Industrial Metal albums to have in your collection. It’s good. It’s damn good. It’s really damn good. But it surely isn’t their best.

What was at that time an enormous shift in sound, the band was almost completely different than what they’d been doing the last 8-9 years prior. You would think every member except Spider had changed but in reality, all that had happened was a percussionist left and a 2nd guitarist came in. Suddenly came inclusions on to video game and movie soundtracks, MTV, huge tours, and radio play. The unforunate part of the music business when you have that kind of exposure is maybe 20% of all those new fans were actual fans of the band and cared about more than just 1-2 songs. Oh well. They gained some hardcore fans though, and that’s what matters. 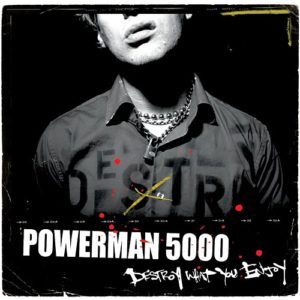 I’ll never understand the backlash of this album. Taking it a step further than “Transform”, they stripped it down all the way and brought PM5K to the bare bones of just hard rock with a punk attitude. No electronics. No industrialization. No loops of any kind. Just straight guitars, bass, drums, and a vocalist not giving a fuck. What’s not to like…??? It still sounds like them and it’s raw and real. The songs are still as catchy as anything they’ve ever done. It’s just a fun ass set of tunes to jam out too. Simple as that.

On a personal note, I listen to this album probably the most. 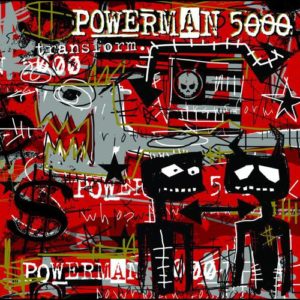 If you remember when “Free” was released as our first taste from “Transform” after the Doomsday fiasco, it was pretty mindblowing. Now it’s just another PM5K song, but at the time… It barely felt like the same band and took a few listens before it really settled in that this was the new direction and it was pretty damn good! There were still traces of the sound that made them huge in songs like “That’s Entertainment”, “Transform”, and “Hey, That’s Right!”, but generally, yeah there was a shift in sound. It was more melodic, a little more stripped down, more focus on the content within the lyrics. The thought provoking PM5K album, as you will. I don’t think it can be argued that it’s the most “mature” sounding album they’ve produced. 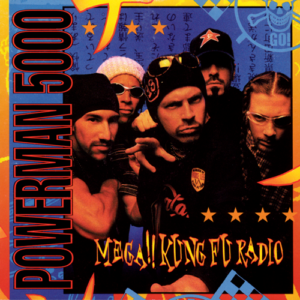 Yes, this album is a re-release of their 1995 indie album, “The Blood Splat Rating System”, with a couple new songs added in, a little remix and remastering, a couple vocal re-recordings, and voila. Their major label debut. Most likely due to how long it took them to reach this level, some people probably thought they were riding the coat-tails of KoRn, Limp Bizkit, 311, and Rage Against the Machine, but the truth is, this was a good 7-8 years in the making. They made some noise in Boston and after a couple EP’s and the aforementioned indie album, they were finally signed and released this funky hip hop metal bad boy.

This was the first album I bought from them AFTER first hearing “When Worlds Collide” on Tony Hawk Pro Skater 2. For whatever reason, I had both CD’s in my hand but 13 year old me went with this album instead and I’m so glad that I did. Technically, this is my favorite album from them, but I don’t believe it to be their most definitive album so that’s why it’s #2.

Spider really likes to neglect this album and it sucks because you’ve got songs like “Organizized”, “Car Crash”, “Earth vs Me”, “Swim with the Sharks”, “Mega Kung Fu Radio”, and “Standing 8” that would fit in nice and snug anywhere in their set. Yeah, I left off “Neckbone” and “Tokyo Vigilante #1” because they were the singles. Suck it. 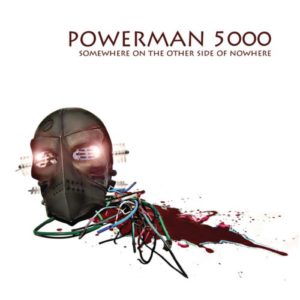 And here we have what I feel is the album that best represents Powerman 5000 as a whole. This goes for the longtime fan, the casual fan, the person that used to like them and forgot about them, or a brand new fan. You can hand this to any of the above and be like “Check this out!” and they proceed to check it out and be like “God damn this is Powerman?” and you nod your head in satisfaction.

Every song is a winner. As is the case with pretty much all their release, it’s short and sweet and by the time it’s over you want more. They brought back the electronics and sci-fi. They brought back the space suits and laser beams. I dare you to say that “When Worlds Collide” is better than “Super Villain” or “V is for Vampire”. In fact, I don’t dare you, because you’re just wrong. This is the album you give to a strictly TTSR fan and say here, they did it better. To a hardcore Powerfan, it’ll go anywhere in their list, but you won’t hear them say it sucks. Ironically, this has my least favorite album artwork.

“Show Me What You’ve Got” is just about as great as it gets as an album opener… then they made “Invade Destroy Repeat” on the next album. The live version of “Horror Show” is how they should’ve recorded it for the album. Maybe we’ll get a free bonus track one day?

Anyway. This is where they had some new oxygen put into their space suits and I’m thankful for that because it means they still exist and a World with Powerman 5000 is a better one. 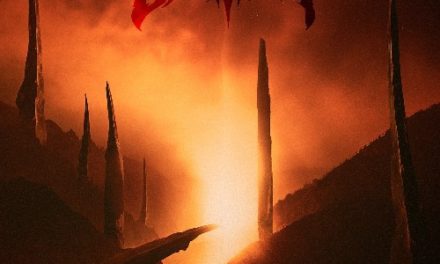 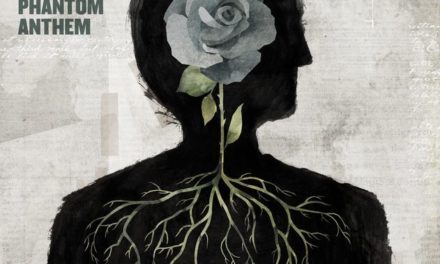 Avatarium post lyric video “Into The Fire/ Into The Storm”